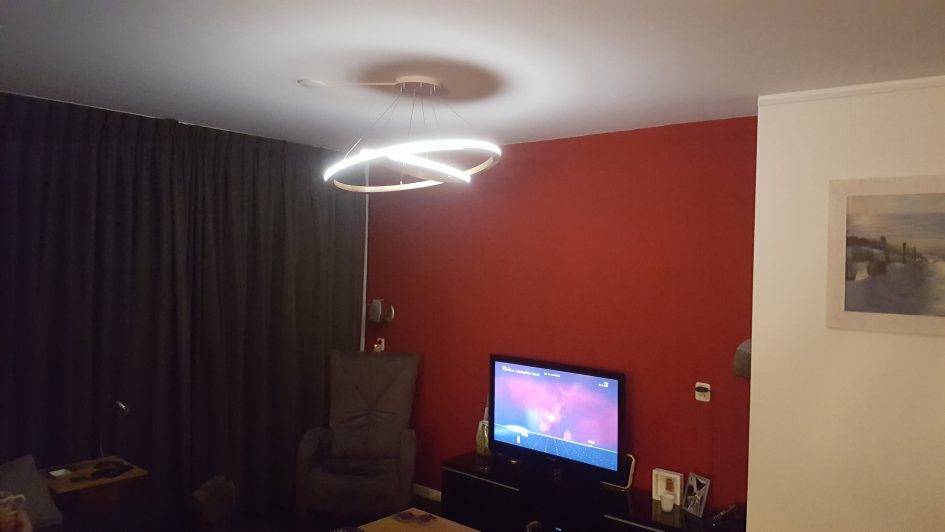 Some time ago, I saw Modustrial Maker’s video on YouTube and I was impressed by simplicity and the beauty of the design. Modustrial’s version contained RGB LEDs that can display different lighting patterns, a little more complicated than I wanted to do for my living room. I decided to make one with only white LEDs from a commercially sold LED strip with a remote.

I started by making a design of two rings. I would cut them in sections from birch plywood and then construct the rings by gluing the ring segments together.

I figured that 2.5 mm white polystyrene plate would make for a nice diffuser covering the LEDs. The only thing is, the strips I cut would not bend easily around the rings. So I had to preshape them by clamping them over the rings and carefully heating them.

I covered the plywood with some very nice dark veneer (forgot what kind of wood it was) and gave it a few clear coats for protection. I decided to power the LEDs via the cables the rings are suspended from. Three cables, one for the positive pole, one for the negative, and one for stability. This meant I needed to make the cable stops myself as well. I turned them from anodized aluminium round staff.

The finished item looks awesome. Here it is, hanging in my living room. The only thing I wish I’d done is put in a LED unit with a little bit more power, but I can always correct that by making a few more light ornaments …